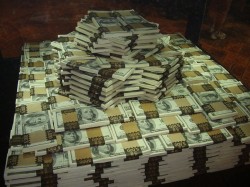 How is money created?  If you ask average people on the street this question, most of them have absolutely no idea.  This is rather odd, because we all use money constantly.  You would think that it would only be natural for all of us to know where it comes from.  So where does money come from?  A lot of people assume that the federal government creates our money, but that is not the case.  If the federal government could just print and spend more money whenever it wanted to, our national debt would be zero.  But instead, our national debt is now nearly 16 trillion dollars.  So why does our government (or any sovereign government for that matter) have to borrow money from anybody?  That is a very good question.  The truth is that in theory the U.S. government does not have to borrow a single penny from anyone.  But under the Federal Reserve system, the U.S. government has purposely allowed itself to be subjugated to a financial system in which it will be constantly borrowing larger and larger amounts of money.  In fact, this is how it works in the vast majority of the countries on the planet at this point.  As you will see, this kind of system is not sustainable and the structural problems caused by such a system are at the very heart of our debt problems today.

So where does money come from?  In the United States, it comes from the Federal Reserve.

Rather, the U.S. government creates a bunch of U.S. Treasury bonds (debt) and takes them over to the Federal Reserve.

The Federal Reserve creates a billion dollars out of thin air and exchanges them for the U.S. Treasury bonds.