“The Death of American Radio: Opportunity for Progressive Empowerment” 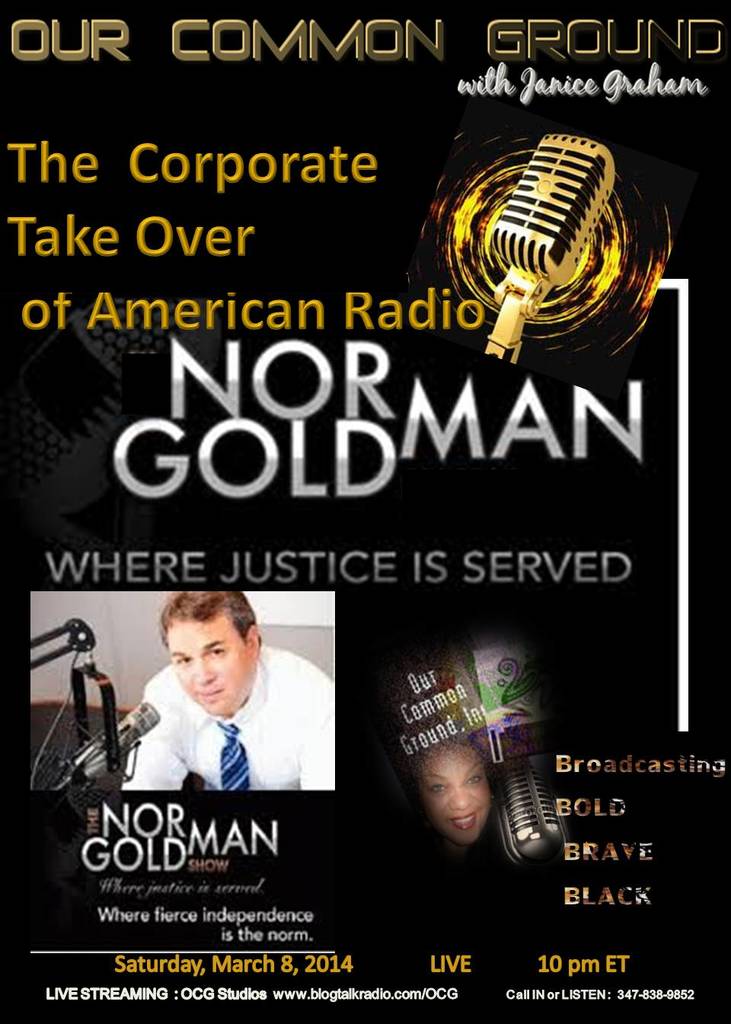 "The place where fierce independence is the norm. Where Justice is Served."

Norman Goldman is the host of "The NorMAN GoldMAN Show" heard nightly through a live podcast and syndicate to terrestial radio across the country .

He knows all that legalese "ipso facto habeas corpus" stuff. Better yet, he knows how to make sense of it all. Day after day, on issue after issue, Norm brings it all into focus. What matters, why it matters, and why it matters to you. His is an inspiring life story which takes you from rags to righteous, to radio. His is the incredible true story of Norman Goldman's Journey to Justice, in politics and in life!

For years, Norman has been providing insightful legal analysis for MSNBC and The Ed Schultz Show.

His live show, "The NorMAN GoldMAN Show" brings his signature clarity, wit and wisdom to the issues of the day. He also gives you a chance to talk back as he takes calls from all across the country on his nightly live stream broadcast. . Based in Los Angeles, Goldman's national radio program is distributed by Compass Media Networks.

The program's motto is "Where justice is served", but on-air Norman also uses the motto "The place where fierce independence is the norm", a pun on his first name. Recently Goldman created the "four point plan to save America", after chastising politicians such as President Barack Obama for betraying their campaign promises. It includes power-transparency; "a WikiLeaks for radio", and a grassroots quarterback for the coordinating/funding of the progressive message and viewpoint.

CC Media the vehicle used by private-equity firms Bain Capital LLC and Thomas H. Lee Partners LP to privatize Clear Channel Communications in 2008 reported for the latest period a loss of $309.2 million, compared with a year-earlier loss of $191.3 million, and pointed to equity in losses of non-consolidated affiliates and higher interest expenses. Its revenue slid to $1.69 billion from $1.7 billion a year before as a 2% decrease in its outdoor revenue offset growth in its media and entertainment segment.

In his “Beyond Norm” segment of the 3-hour broadcast, Norman provided a nightly legal and business expose’ of Clear Channel and Cumulus, the two giant corporate owners and destroyers of terrestrial radio, and why the huge losses by Clear Channel is important. In this series, he analyzes the future and power of streaming broadcasting as the only highway of information worth a hoot. He explained IN DETAIL, what has happened and what it means for talkers, advertisers and listeners. That’s us and that is what we will be talking with Norman Goldman tonight with him on OUR COMMON GROUND.
I have for years been a nightly listener and fan of this Norm’s, and it is indeed Fierce and where Justice is Served. His is the best in the business.

Born in New York City, Goldman was orphaned at age eleven, and he spent the rest of his childhood in New York orphanages from high school in 1976 at age seventeen.

Goldman graduated from Hunter College of The City University of New York with a B.A. degree in political science. He then attended and graduated from law school on a full scholarship at Loyola Law School of Los Angeles. He passed the California Bar Exam at age 26.

Goldman was the plaintiff's attorney in Krumme vs. Mercury, a 2002 lawsuit in California. Both the trial court and the California Court of Appeal found for the plaintiffs that the insurance companies were mislabeling agents as independent brokers. The court upheld damages and attorney's fees. An insurance industry journal has described the case as "infamous".
Goldman also represented plaintiffs in a lawsuit filed in San Francisco Superior Court against Auto Insurance Specialists accusing the company of paying sales money to an insurer in exchange for commissions

GOLDMAN’S 4-POINT PLAN TO SAVE AMERICA

“We need our own "American Crossroads" and have it double as not just media buyer but progressive-group coordinator and coalesce on a simple group of broadly popular economic populist points that will re-define "the center" and attract people regardless of labels and party affiliation. Tax fairness; a balanced budget (by waging war on corporate welfare; waste, fraud and abuse, especially in the Pentagon budget and war profiteering) and creating American jobs by attacking outsourcing and making green technology here, are good places to start.

After the debacle of the 1964 Barry Goldwater election, and the ascension of Ronald Reagan, the right wing has almost completely achieved their long term, relentlessly-focused goals: they have a five member working group on the Supreme Court and they have propagandized the American people so well and so thoroughly that we are all now playing on their turf. They have set the terms of the debate through use of language (curse you, Frank Luntz and bless you, George Lakoff!) and manipulation of symbols (American flag and Bible, anyone?). Next up for them is the end of Social Security and Medicare. If we don't do what needs to be done, it will be game over. The end is almost near.”

"Speaking Truth to Power and Our selves"