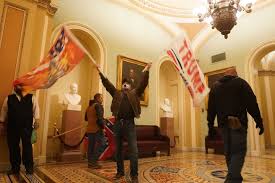 We have all seen and witnessed the Insurrection. Violent white men 'wilding', hunting . . . in the ready to do destruction, harm, and injury. At the ready to kil and maim those who stand between them and their "right to stand superior" in theri whiteness. Yeah, just because. They filmed and took selfies, proclaiming that somehow just by being in the building they had won.

Now all the people, elected, appointed politicians, mostly Republican and right-wing conservatives; those journalists, authors, and commentators who characterize themselves as "liberal" smart and bold - all are trying to make this 360 or 90 degree turn to be on the right side of history. To have been savvy enough, smart enough, read enough, and had sufficient numbers of interchange with Black friends and associates.

What are your thoughts on the political fallout, media response, and your personal response to what happened on Januar 6, 2021? What should be done to hold those responsible to account? Who are they?