The Oracle: Cornel West on Obama

Dept. of Disputation
The Oracle
by David Remnick November 2, 2009 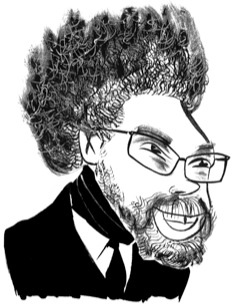 Among the grandees of the Princeton University faculty, past and present, Cornel West is the only one to have appeared in two sequels of “The Matrix,” playing a Zion Elder called Councillor West; recorded songs with both André 3000 and John Mellencamp; and seen his words quoted on a Starbucks cup. A couple of weeks ago, West published a memoir titled “Living and Loving Out Loud.” He did not write it, exactly; the book is an as-told-to with David Ritz, who has similarly collaborated with Ray Charles, Aretha Franklin, and Grandmaster Flash. None of the above can be said of Christian Gauss or Woodrow Wilson.

Cornel West is everywhere, constantly on the road. A self-fashioned “scholar-bluesman,” he travels from lecture hall to church pulpit and on to Barnes & Noble, wearing a formal and elegant uniform––black suit, white shirt, French cuffs, black tie, black scarf. “I’ve got four more just like this one,” he says. “And the dry-cleaning bills to go with it.”

West stopped by Times Square the other day on his way to a speaking engagement uptown. He had in tow his publisher and his sweetly beleaguered assistant, Mary Ann Rodriguez, who valiantly attempts to get him to his gigs on time; just in case Rodriguez loses him, he carries a tiny leather-bound date book crammed tight with the details of his obligations, paid and otherwise. “I’ve never spent a weekend in Princeton,” West said. “I’m on the road, on the move, brother. I meet magnificent people, I have a great time, I learn so much, and, at the same time, I’ve got to make some money, because I’ve got women in my life—or women in my past, let’s put it that way.”

Of the many roles that West has played in the academy and the media lately, it’s been his ongoing support-slash-critique of Barack Obama that is the most curious. It was not a relationship that began with daffodils and candy. At Tavis Smiley’s State of the Black Union conference, in February, 2007, West said that he admired Obama as a “very decent, brilliant, charismatic brother,” but lamented that he “holds us at arm’s length,” the better not to alienate white voters.

A few days later, Obama called West and the two men spoke for what West described as four hours. “First thing he said was ‘Well, Brother West, you’re much more progressive on these things than I am. We’re not going to agree on everything.’ I said, ‘Of course! My only thing is—you be true to yourself, I’ll be true to myself. That’s all I ask.’ Then he went in and talked about what King meant, what that legacy meant, how he’d been shaped by it, and so forth. And it was a genuine opening. That’s why I could discern a certain decency. I said, ‘Brother, I will be a critical supporter. I’ll be a Socratic supporter.’ ”

Nine months later, at a fund-raiser at the Apollo Theatre, West introduced Obama with unbridled enthusiasm and Obama returned the favor, calling West “a genius” and “an oracle.”

West campaigned for Obama in Iowa, South Carolina, Illinois, and Ohio, but he was dismayed by his speech on race in Philadelphia. West thought the speech was politically “masterful,” but “intellectually, it was pretty thin.” He kept his thoughts to himself, but he was especially annoyed that Obama had said that the Reverend Wright was full of rage, because he was somehow stuck in time, still wrestling with Jim Crow, and that he equated black anger with white resentment. “Have you seen the young brothers and sisters in prison, on the block?” West said. “I don’t mind being an angry black man in terms of having righteous indignation at injustice, given the situation right now in the country. But as a candidate he had to distance himself. . . . There have been excesses of affirmative action and so forth and so on, but Jim Crow de facto is still in place. . . . Who are the major victims of that? The poor—disproportionately black and brown and red. You got to tell the truth, Barack. Don’t trot out this shit with this coded stuff!” And yet, West said, “I intentionally remained relatively silent. It was a very delicate moment.”

Now, a year after the election, West has kept to his promise: he is a Socratic supporter. “I don’t want to downplay the progress, though, because Obama is a black man. It’s just that: first, you’ve got the parents. It’s more Johnny Mathis than Curtis Mayfield, or more Lena Horne than Sarah Vaughan, in terms of phenotype. And, second, you’ve got someone who really is a master at easing the fears and anxieties of white brothers and sisters. That’s part of the basis of his success. And I don’t put that down. We need different kinds of people in the world.”

So far, West finds himself infinitely more impressed by Obama’s mastery of “spectacle” than by his attention to the poor. “In terms of the impact on young people, I think it’s a beautiful thing,” he said of Obama’s election. “But, in the end, even spectacle has to deal with the darkness. That’s where the bluesman comes in. Guy Lombardo can be nice on a certain night, but you’re going to need Duke Ellington and Count Basie.” ♦

Permalink Reply by michael w. caesar on November 2, 2009 at 5:22am
Let me say this...
These two men have gained experiences in life from different perspectives, so it would be impossible for each to agree with the other on every little thing. Suffice to say , that we don't need to accentuate on any single aspect that one has voiced with regards to the other in any way form or fashion. They both serve humanity well, and the way I see it is a deep admiration for one another is a good start; and having said that,, do disdain any critical approaches on just that directed at either gentleman.
Lets try to uphold and build instead of looking for ways of tearing down!
Thanks for this post!

Let me say this...
These two men have gained experiences in life from different perspectives, so it would be impossible for each to agree with the other on every little thing. Suffice to say , that we don't need to accentuate on any single aspect that one has voiced with regards to the other in any way form or fashion. They both serve humanity well, and the way I see it is a deep admiration for one another is a good start; and having said that,, do disdain any critical approaches on just that directed at either gentleman.
Lets try to uphold and build instead of looking for ways of tearing down!
Thanks for this post!