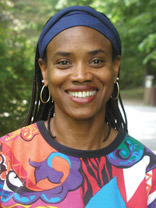 “Reverend Irene Monroe was enthusiastically selected by board and staff for her contributions to the advancement of equality for LGBT people,” said Dianne Phillips, GLAD’s board president. “She has set an inspiring example of leadership and compassion for us all.”

The award will be presented at the 13th annual Spirit of Justice Award Dinner on Friday, October 26th at the Boston Marriott Copley Hotel.

Reverend Monroe’s powerfully-voiced syndicated queer religion column, written with unconditional love toward all readers, has helped to shape public dialogue on LGBT and racial justice issues. Reverend Monroe’s work aims to highlight how religious intolerance aids in perpetuating other forms of oppression such as racism, sexism, classism and anti-Semitism.

"I am honored to be this year's awardee,” said Reverend Monroe. “But I've not been in the struggle alone. The interconnectedness between my work and that of GLAD's is best depicted by the African proverb that states, “I am because we are; and since we are, therefore, I am.” My social justice work in churches and in the streets comes to fruition because of GLAD’s activism in the courts on behalf of us all."

Reverend Monroe is a founder of numerous faith-based LGBT organizations including: The Religious Coalition for the Freedom to Marry, Equal Partners of Faith, and Christian Lesbians Out. She is one of the founders and member emeritus of the National Black Justice Coalition. Reverend Monroe also served on the Religious Advisory Committee of Human Rights Campaign and was a commissioner on the GLBT Commission in Cambridge that attends to and addresses the needs of Cambridge's queer community.

Reverend Monroe’s syndicated column appears in The Huffington Post, Bay Windows, The Advocate, and The Bilerico project. She is a frequent guest of OUR COMMON GROUND with Janice Graham.

Reverend Monroe is featured in the film, “For the Bible Tells Me So,” and has been profiled in O, Oprah Magazine. She was also profiled in the Gay Pride Episode of “‘In the Life’ TV” where the segment on her was nominated for an educational Emmy. She has received the Harvard University Certificate of Distinction in Teaching several times.

In 1998 Reverend Monroe was the first African American lesbian to be bestowed the honor of being Grand Marshall in the Boston Pride Celebration. Reverend Monroe sits on the advisory boards of several national LGBTQ organizations.

For more information about sponsorships, or to purchase tickets, please visit www.glad.org.