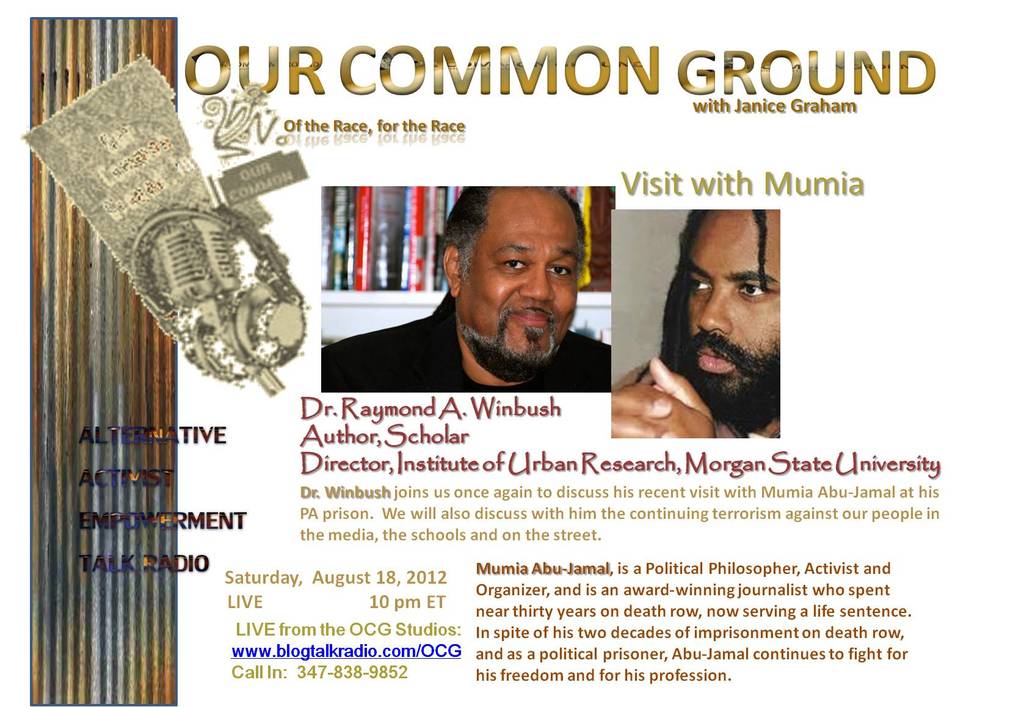 Dr. Raymond Winbush joins us once again to discuss his recent visit with Mumia Abu-Jamal at his PA prison.  We will also discuss with him the continuing terrorism against our people in the media, the schools and on the street.

ABOUT Dr. Raymond A. Winbush

Raymond A. Winbush is the Director of the Institute for Urban Research at Morgan State University in Baltimore Maryland. He is the former Benjamin Hooks Professor of Social Justice at Fisk University and Director of the University’s Race Relations Institute. He also served as Assistant Provost and Director of the Johnson Black Cultural Center at Vanderbilt University. A native of Cleveland Ohio, Dr. Winbush, is a product of public school education, K through 12. In 1970, he graduated with honors in psychology from Oakwood College in Huntsville Alabama, and during his undergraduate education there, won scholarships to both Harvard and Yale Universities. After graduation he won a fellowship to the University of Chicago and received both his Masters and Ph.D. in psychology in 1973 and 1976 respectively.

From 1973 to 1980, Dr. Winbush taught at Oakwood College and Alabama A & M University in Huntsville before coming to Vanderbilt University in the fall of 1980. At Vanderbilt he was Assistant Provost of the university, held an adjunct professorship in the Department of Psychology and was Associate Professor of Human Resource Development at Peabody College and. His research interests include infusing African American studies into school curricula, African American adolescent development, Black male and female relationships and the influence of hip hop on contemporary American culture. He is the author of numerous articles on the “politics” of Afrocentricity and the resistance it encounters among scholars who wish to maintain existing intellectual paradigms. A recent article for the Baltimore Urban League coauthored with his colleague Dr. Tracy Rone at the Institute for Urban Research, cited the hidden dangers of environmental lead poisoning in Baltimore City.

He is the author of three books, including his latest, Belinda’s Petition: A Concise History of Reparations for the Transtlantic Slave Trade, (Xlibris, 2009) a “prequel” to his book, Should America Pay?: Slavery and the Raging Debate on Reparations which was published by HarperCollins in 2003 and hit Essence Magazine’s bestsellers list shortly after its release. It has been called by Cornel West a “must read” when it comes to understanding the struggle for reparations.. His book, The Warrior Method: A Program for Rearing Healthy Black Boys, (Harper Collins, 2001), is a comprehensive African-centered program for rearing healthy Black boys in a racist society.

He received a five-year $2.6 million grant from the Kellogg Foundation revitalized the historic Race Relations Institute at Fisk University. The 32nd Institute was held July 6-12, 1998 at Fisk with 250 attendees including actor James Earl Jones, the children of Kwame Nkrumah, W. E. B. Du Bois, Marcus Garvey and Richard Wright, Dr. John Hope Franklin, Congressman John Conyers and Naomi Tutu of South Africa. Rap stars Chuck D and other members of the hip-hop community attended, as well as well-known psychiatrist Dr. Frances Cress Welsing. The Race Relations Institute is the only institute of its kind housed at a historically Black university. Another grant from the Will and Jada Pinkett-Smith Foundation is helping to establish The Warrior Institute in Baltimore that teaches the Warrior Method to parents, teachers and community activists.

His consultations are numerous. He is a former member of the Executive Board of the National Council for Black Studies. He is former President of the Southern Region of the Association of Black Culture Centers, and has consulted widely with organizations ranging from the Joint Center for Economic and Political Studies, National Research Council and the Ford Foundation and several American universities.. He currently sits on the Advisory Board of both the Journal of Black Studies, and Africalogical Perspectives the most prestigious journals in their field. He has held Board memberships on the Center for Democratic Renewal chaired by Rev. C. T. Vivian and the National Vanguard Leadership Program, chaired by Camille Cosby which has been instrumental in recording the lives of elders in the American African community. 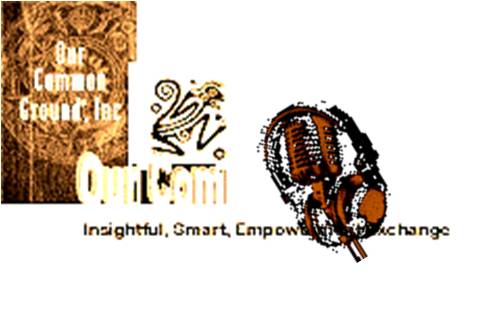 Dr. Winbush has been a OUR COMMON GROUND Voice for many years. Tonight, he joins us once again to discuss his recent visit with Mumia Abu-Jamal at his PA prison. We will also discuss with him the continuing terrorism against our people in the media, the schools and on the street.