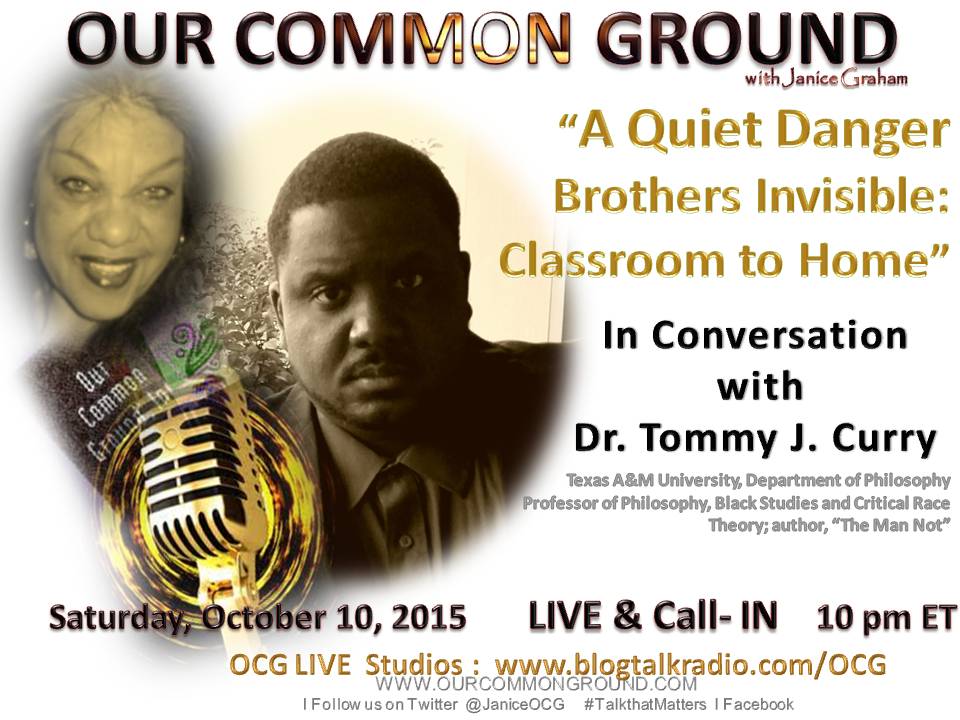 about Dr. Tommy J. Curry
Dr. Curry is an Associate Professor of Philosophy at Texas A&M University. He is a Ray A. Rothrock Fellow 13'-16' in the Department of Philosophy.

He is an editor of PhilPapers, Choice Magazine and a regular contributor toRacismReview.com and OUR COMMON GROUND.

On this broadcast, we begin with
Over the last several years, Dr. Curry has published over three dozen articles in prestigious venues like: The Journal of Black Studies, The Radical Philosophy Review, The Pluralist and The Transactions of the Charles S. Pierce Society. He is the editor of a forthcoming re-publication of William H. Ferris’s The African Abroad, and is currently working on several manuscripts: the first full-length publication on Derrick Bell’s political philosophy that birthed the Critical Race Theory movement entitled Illuminated in Black; a philosophical exploration of Black male death and dying entitled "The Man-Not;" and a book on Josiah Royce's racism.

His work in social justice, applied ethics, and bioethics concerns the present interpretation of the Belmont report, and the racial/class barriers to minority access to medical innovation in health care.

He has been interviewed by Forbes.com, the Wall Street Journal,Salon.com and other popular venues for his opinions on politics, ethics, and racial justice issues.
______________________________
__________An Episode Note____________________
On this broadcast, we begin with the recently released report by the Schotts Foundation for Public Education, "Black Lives Matter"
We recommend that you either review or read it prior to the broadcast.http://blackboysreport.org/

"It seems that America has tolerated and grown accustomed to the under-education of African American males largely because it has written this off as a “black problem.” Rather than being embraced as an American problem and challenge, our leaders in politics, business and education, have implored the Black community to do something, while washing their hands of responsibility for the failure of the public institutions that should serve them. . . .
The consequences have also been evident in the high rates of unemployment in economically depressed, socially marginalized neighborhoods, cities and towns where desperation festers and crime and violence are rampant.

The consequences have also been felt by families and communities where fatherless children fall prey to a vicious cycle of failure in part because they lack access to fathers because they are incarcerated, or don’t have the skills to obtain a job to support their family." - Pedro A. Noguera, Professor of Education
Executive Director, Metropolitan Center
New York University - See more at: http://blackboysreport.org/national-summary/afterword-by-pedro-a-no...

You are invited to bring your thoughts about the pressing issues facing our community. SHARE please

"Speaking Truth to Power and OURselves"